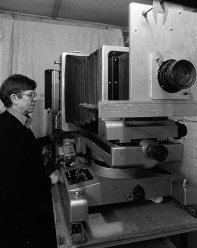 THE PAST MW went to art college between 1948 and 1953. Like some of his fellows he left having acquired a compulsive behavioural characteristic i.e. hes only really in good health when making things. Got into photography and filmmaking in 1965 and has stayed with these as creative outlets ever since. Even as a student making etchings and lithographs he liked working in unusual formats and retains that to this day. This is not a gimmick, because the subjects which interest him demand such an approach.. A liking for skylines and horizons led inevitably to the panorama, in an era when the word was associated with a 19th century taste for exploring the worlds Grand Viewpoints. The Giant 360 Cirkut cameras invented at the turn of the 19th/20th century were designed expressly for this purpose but had only previously been used with large black and white film rolls. MWs claim to fame was as the first photographer to marry this equipment to colour film; circa 1970 this took the form of a unique aerial transparency material to which no-one else had access. The resulting images, several square feet in size, are many times the area of the next largest large-format camera material. Full details of this technology can be found at: www. bigshotz.co.nz/photographers. Later a few photographers persuaded Kodak to make colour negative rolls for the Cirkuts but the transparency route has never been explored again. The spinoff has been another unique product: archival Cibachrome contact-prints. There were many exhibitions of these in prestigious national locations but the reproduction technology of that era could not adequately convey them to a mass audience. 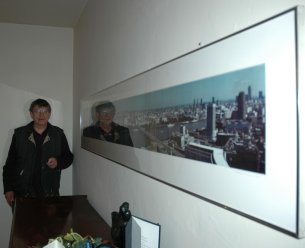 Present Now in his 75th year he still likes working in these formats, as it is the only way to make his choice of subjects visible at all his contention being that Content is Everything and Composition is Irrelevant.most of his output is meant to be viewed in transit and not viewed all at once. .doesnt do 360 much anymore since now anyone can do it using software given away in magazines.the colour film, chemistry and paper he used with the Cirkuts has now disappeared for ever with the rush to All-Consuming Digital:.consequently the big Cibachrome contact- prints which were for many years his main outlet have become unrepeatable collectors' items. Is in the process of constructing digital copies of all the material from that era so that it may became visible again Has now gone back to pre-Cirkut techniques of big linear joiners for his new work and still finds no shortage of exciting and unrecorded subjects(.and at least scan-and-stitch digital makes that easier )..a few wealthy people buy framed versions but they cost a lot to make.hasnt had any bigtime exhibitions for ten years but has lots of new stuff which needs an outlet.to minimise the trouble of making and transporting all those giant frames is hoping to display them sometime as a slide show on a 20 foot daisychained plasma installation. Working towards that end is the main purpose of this website